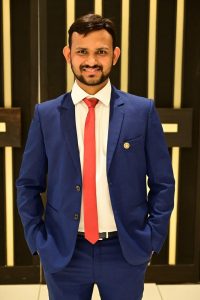 He became PHF during this year.

He went on to be the President of Rotary Club of Wadhwan City in 2020-21 as the DG Home Club President.

By Profession he is Dentist master in Periodontology & Oral Implantology. He is private practitioner practicing with his father who is senior most dentist of the city and along with his wife, too at Pratik Dental Clinic & Implant Centre. His wife Rtn. Dr Priyanka Shah is also a dentist and past rotaracter. The lovely couple is blessed with beautiful daughter Prisha.