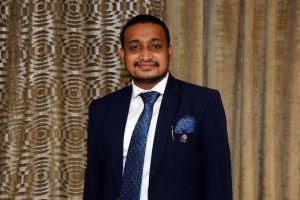 Vatsal was born on 16th April in Jamnagar to Smt. Jignaben a home-maker & Late. Shri Jayeshbhai Khimasiya and is accompanied by a younger sister Khyati. Vatsal is married to Krishma, she is equally involved with Rotaract and is a Practicing Chartered Accountant by profession. Vatsal is a commerce graduate and runs Colossus Studios which deals in Website UI/UX Design as well as Graphics Design. He is also involved in the family owned business of Manufacturing of Brass Components/Part as well as trading of various ferrous and non-ferrous metals.

Apart from Rotaract, Vatsal is also the Charter Secretary of Jamnagar Toastmasters Club. Vatsal is the Licensee of TEDxLakhotaLake (an independently organized TED Event) and he made Saurashtra witness it’s first ever TEDx Event in July 2017 organized at Jamnagar with an astounding success. He is also a 2021 TED Member. He began his Rotaract Journey in 2014 as a member of Rotaract Club of Jamnagar. His interest in Rotaract grew as he made the Club, the only one to successfully plan & execute the “Up For School” Project in Rotaract District 3060 & India during World Rotaract Week 2014.

His keen interest in designing made look after all the design aspects of the clubs then signature event Jalwa – A Charity Fashion Show for two consecutive years. He was a part of the IDYE Team to RI District 3190; Bangalore in 2015.

His talent led him to be selected as District Editor in 2016-17, that is when he got the popular tag of Brand Creator for his incredible work towards #brandrotaract3060. He justified the trust bestowed on him by grabbing the Best District Officer Award. In 2017-18 he led the Rotaract Club of Jamnagar as the president and also served as DRR Helpdesk during the year. It was his dedication and sincerity which made the then DRR & DG to felicitate him as a Paul Harris Fellow. He was entrusted with the responsibility of District Council Chair in 2018-19, the glorio

us year in which District 3060 hosted RZI at Vapi. Vatsal served as the District PR & Web Chief in 2019-20 as the district witnessed a new revamped Website as well as DRR’s Dream Project Swachhta Humse gaining popular & engagement on social media.

Vatsal is the very first  DRR from Jamnagar